I still have hope that this will be a good World Cup...

This article aggregates a lot of things that have been said about the World Cup experience this year (South Africa's infrastructure, low scoring games, uninteresting first round match-ups, etc). I've noticed in a few broadcasts that upper seating areas are not filled to capacity and maybe the vuvuzelas make up for this. I think this will change once the Knock-out stages begin, but Nick Webster has a point:

"One wonders if FIFA is already slanting the books with an eye on 2018 and 2022, whose TV rights are up for grabs in December. TV companies are not known to spend millions and billions on products where empty seats fill the lenses of cameras." 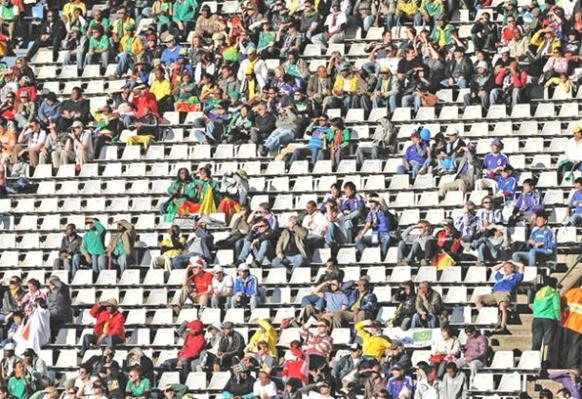 Low attendance - What it breaks down to:

I have so much more fun watching these games on TV.

I would have loved to go to South Africa this year and I have high hopes for Brazil 2014. I had my heart set on it about 5 years ago (even before Germany 2006). But I'm honestly glad I didn't get to go. I have a great time watching these games with my friends at bars, houses, 3D movie theaters and my bed (for those early morning matches that wouldn't have enough cuorum, but are of real interest to fans). TV coverage has gotten so good (save for Mexican announcers) that spending all that money to have an OK ticket, be in line for hours, stuck in traffic, over-pay for everything, just isn't part of my soccer/futbol/football ritual. I behave the same way at the stadium as I do everywhere else: yelling, jumping, chanting, drinking.

So is this a generational thing? I still enjoy watching a game at a stadium, but the enjoyment/hassle ratio for this world cup wasn't balanced enough.

I would love to visit South Africa post-World Cup, but the hype just hasn't payed off yet.

And then there's the low scoring statistics

Please don't try to ignore the low-scoring matches, because Mycroft Holmes over at Bleacher Report will break down whatever theory you have about first round games and knock-out stages.

"In those last seven tournaments since the '80s, the combined average goals per match comes out to 2.53."

"With vertically challenged, undersized, and overrated Spain blanked 1-0 by the not-exactly-mighty Swiss and their clockwork counterattack, there have been just 25 goals scored in 16 games so far in 2010. That's only 1.56 goals per match, or about 40 percent lower than the average over the last 30 years."

"In three of the last seven tournaments (1990, 2002, and 2006), the average goals per match washigher in the first round than over the course of the tournament. Of the remaining four tournaments, only once was there a measurable difference between the first round average and the tournament average. That came in 1986, when a measly 2.33 goals in the group stage increased to 2.54 by the end of the Cup (Maradona's Hand of God notwithstanding)."

I've noticed that my last few posts have been somewhat negative towards the tournament and would like to stress that I'm still hopeful and excited about the upcoming weeks. Advertisers have done an almost evil job of hyping the World Cup and placing the players in every position and situation imaginable.

I'm not one to let bad games bring me down, I'm a River Plate fan after all and we've had 5 years of bad games and seasons (only for those whose faith is not an issue).

We'll just have to keep on waiting and cheering for good games.