If you happened to be watching Brazil vs. Portugal, you might have noticed something weird in keeper Julio Cesar's back after he and Meirelles collided. It was some kind of steel rod support for his injured back. According to FIFA article 4, it's illegal for players to wear any kind of equipment that can be dangerous to the player wearing it or to others. This is the reason players can't wear chains around their necks, or rings in their fingers, since these things can get caught with other players cleats, goal nets, etc., and result in freak accidents.

The Brazilian medics did not in fact check with the referee about this for fear of an incident, nor did the ref make any fuzz about it. After the match was over, they hid these rods in the commemorative flags the teams exchanged at the start of the match. Julio Cesar had been having some back pain leading up to the World Cup after a friendly with Zimbabwe.

What's funny is that the Brazilian coaching staff was ready to make a fuzz about Didier Drogba's arm cast after the Ivorian player suffered a broken arm in a friendly against Japan, before the start of the World Cup.

Sounds like a double standard with a twist of irony. 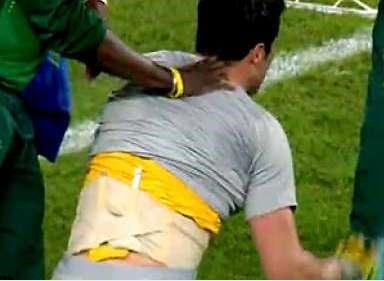