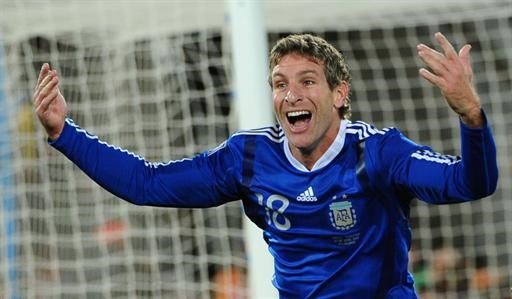 If you don't watch Argentine soccer regularly, it's possible that you don't know who Martin Palermo is. He scored Argentina's second goal against Greece yesterday and wrote another page in a story that's bound to be made a movie someday. He's won about 14 titles, scored over 222 goals in Boca Juniors and is their record striker.

He knows it, Argentina knows it. That's why Maradona trusted in him and chose a 36 year old striker among his 23 World Cup selects. He's the guy you sub in when there's 5 minutes left and you're down. He somehow finds the ball in the box. Up in the air or down in the ground, he'll push it in. I don't believe in miracles, but it's hard to deny this man's luck. He's our rainmaker:

Here's when he missed 3 penalties in one game and was barred from the National squad, over ten years ago:

Here's when he scored a header over 40m away from the goal:

He scores a goal from mid-field:

I'd like to point out, I'm not a Boca Juniors supporter. I'm a die-hard River Plate fan and we've suffered Martin Palermo's goals for years. But for June 11 until July 11, he's Argentinean.