He looks stronger than almost any other player out there and he's only 25. I won't comment on his looks since I'm not a teenage girl, but this article puts him into context with other American athletes, Kobe, Terrell, A-Rod.

Doubtless, he's one of the greatest players in the game and not to be underestimated. His lack of goal this World Cup (actually scored 1 off of his neck) only marks his growth as a team player. 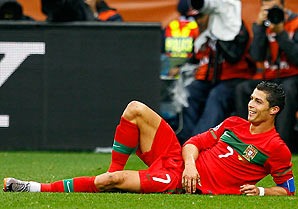 He does look dandy in that picture. That was probably taken while the rest of his team was defending.
;)

He is probably one footballer that holds the Guiness World Record with the most pictures like that, lying on the ground after a flop.

As I was saying previously, Miss World Cup 2010 was held before the WC. Ronaldo won. True story.